CLICK HERE TO GO TO FORUMS
Audeze x RhythmDevils LCD-X Definitive Edition Review and Measurements
58 9,312 by purr1n : Jan 29, 2023 at 5:00 PM
This time around, I felt differently, much differently. This one most certainly deserves it's own thread. And oh, by the way, the "Audeze x Rhythmdevils" and "Definitive Edition" was my touch 100%. No one put me up to it. This is how much I'm impressed with it. Or maybe it's those shiny new Western Electric 300B tubes affecting my mind. Whitney has been sending me a bunch of modded headphones for the past year. Most of them are good. Some of them are very good. He solicits input and I tell him how it is without bullshiting or fluffing him up. This is why he sends stuff to me, being ever super duper patient until I get to them. Then going back to his lab, tweaking stuff iteratively, until something really specially happens. Wanna know a secret about good audio gear? It's that last 5% of performance that makes something click. And that last 5% takes 95% of the effort. 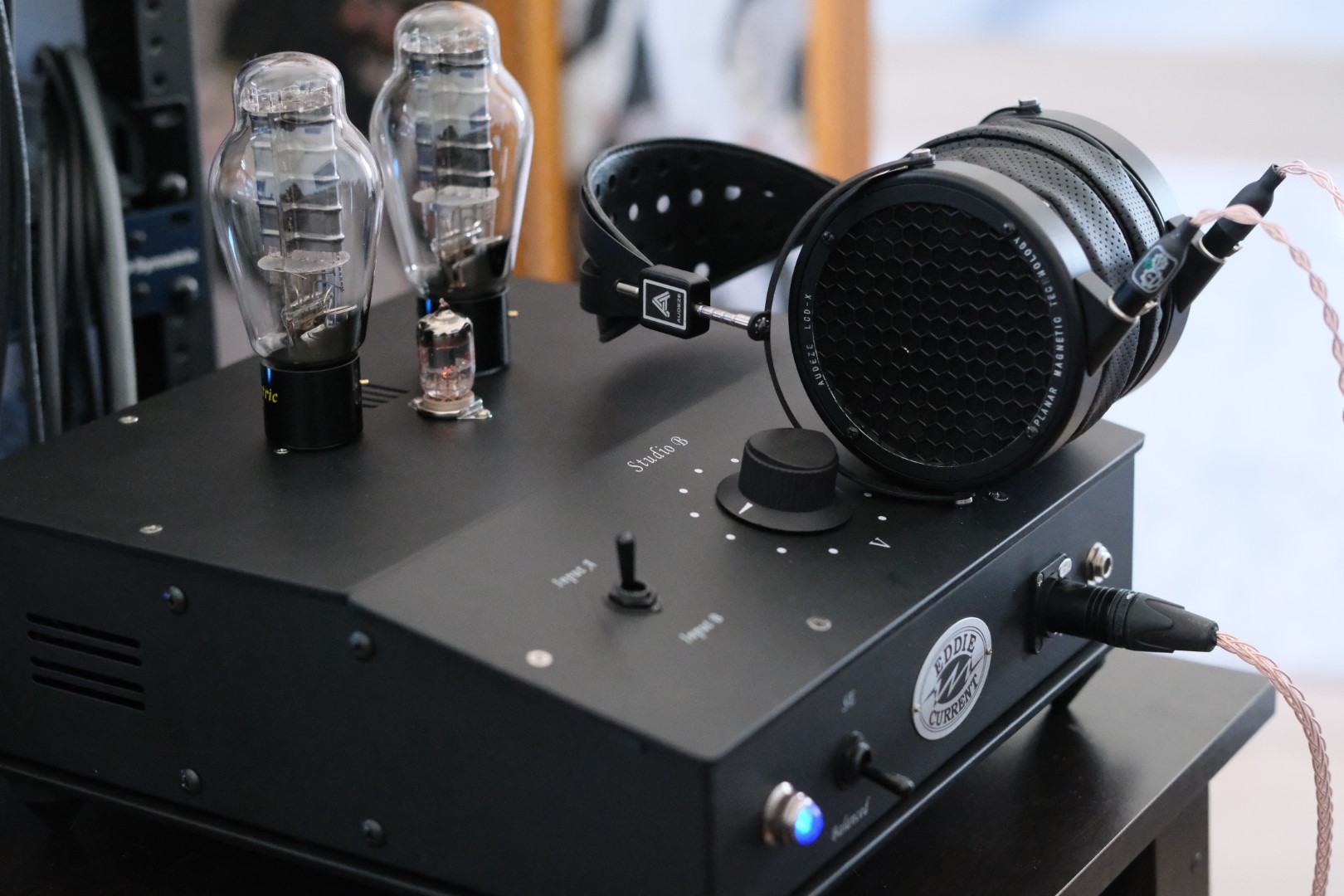 The Audeze x RhythmDevils LCD-X Definitive Edition is fucking good. These are overall the best Audeze headphones I have ever heard. It's not even close. Tonally it's the best. Technical performance, maybe the LCD-4 just pips it a bit (and this was a handpicked LCD-4 from a dozen). Note that I have not heard Audeze's latest and greatest. If I had to use a Japanese RPG character tiering system, I'd give the tonal signature an S- and technical performance A+.

Continue...
atomicbob's SMPS Noise Nuke for HP amps with external SMPS
126 32,578 by atomicbob : Jan 29, 2023 at 11:28 AM
External Switch Mode Power Supplies are included with many headphone amps as a way to keep cost and shipping weight down, except Schiit which use external transformers with true Linear Power Supplies internal to the chassis in their lower cost products. SMPS offer higher efficiency, less heat, smaller size and weight. Unfortunately they often have higher residual noise which does affect amplifier performance. SMPS vs. LPS effect on an example headphone amplifier may be found here:
SMPS vs LPS effect on Garage1217 Project Sunrise III

The following single massive stage LC filter will reduce SMPS residual ripple and noise. Parts cost was approximately $42 US in component single unit quantities, and about 2 hours of construction time. It will work with any external SMPS or LPS between 1 and 48 VDC with current less than 2A. Examples include Garage1217 and the Massdrop Cavalli Tube Hybrid (MCTH) headphone amps. 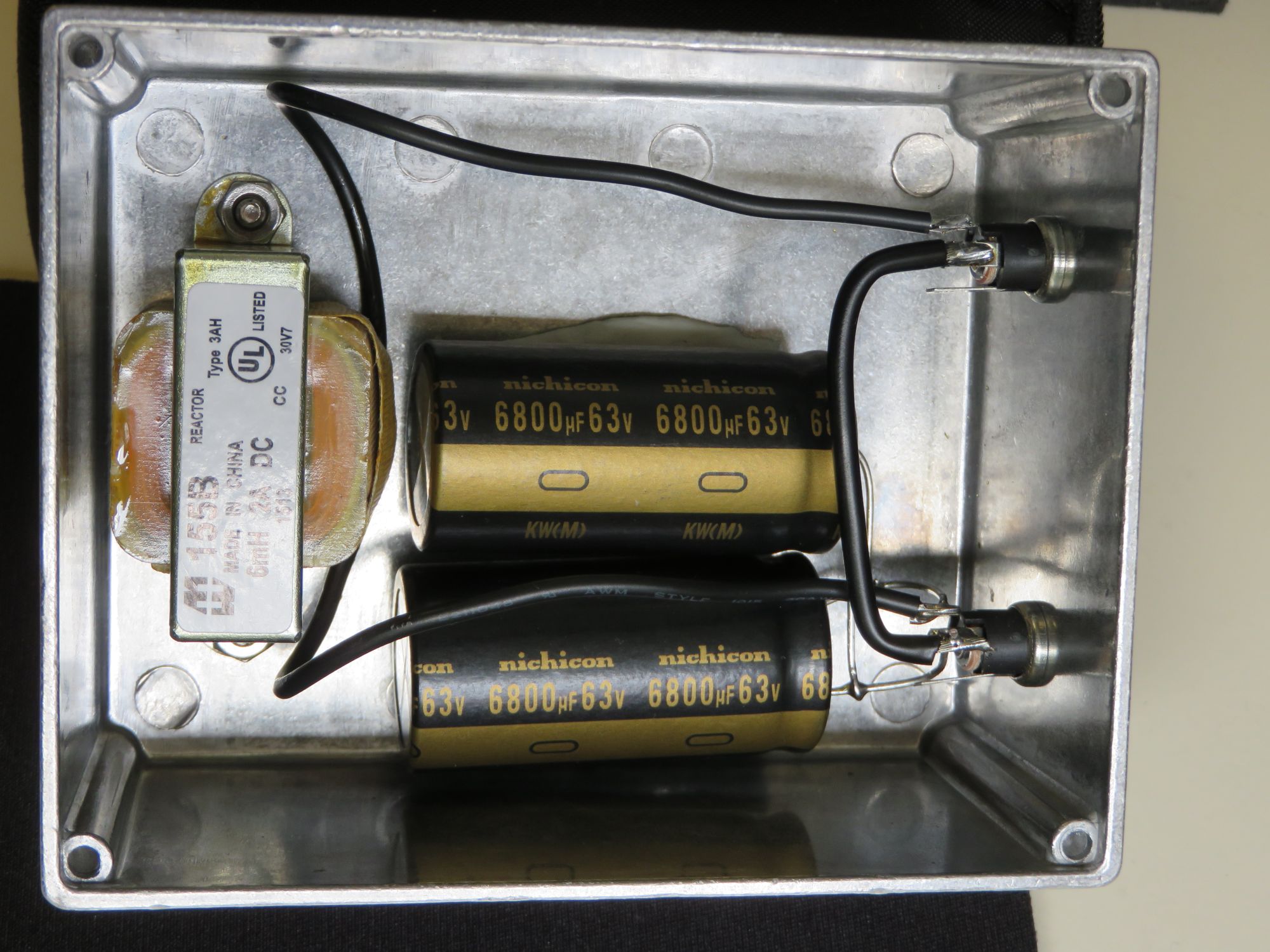 Continue...
Bay Area Meet January 29, 2023
52 3,421 by vzamayoa : Jan 28, 2023 at 7:56 AM
Hi everybody! As some of you may know, we started up a local discord community centered around rebuilding the bustling Bay Area community that was before the pandemic. We have been having monthly mini meets and it's time we leveled up. We are announcing our first big meet. This will be open to everyone but it will be capacity limited to 100 200 attendees. As such, we have created an eventbrite to keep that limitation in mind (but it is entirely free). Also, we want to make sure this event is community driven. We want our community to be able to come out and share their gear and be able to try other gear on their setups. Because of limited table space, we will be taking interested parties' details and then selecting who will be able to bring in their setups. This will be handled by DM'ing Nick or Vince in the discord channel (link below). That being said, if you have headphones or IEMs (or even DAPs) that are portable, feel free to bring those with you and carry those around to test out all the cool stuff that will be there. So here are the details:

Important notes:
We are sponsored by Schiit Audio!!! Please thank them for helping us put together this meet and be able to enjoy this bigger venue and the space needed to bring more of us together! Also for sending us gear to try out! With all the new stuff they just announced, man this is going to be a good one!
Continue...
Decware Zen Taboo mk4 Technical Measurements
11 1,290 by atomicbob : Jan 11, 2023 at 6:48 AM
Listening evaluation picture: 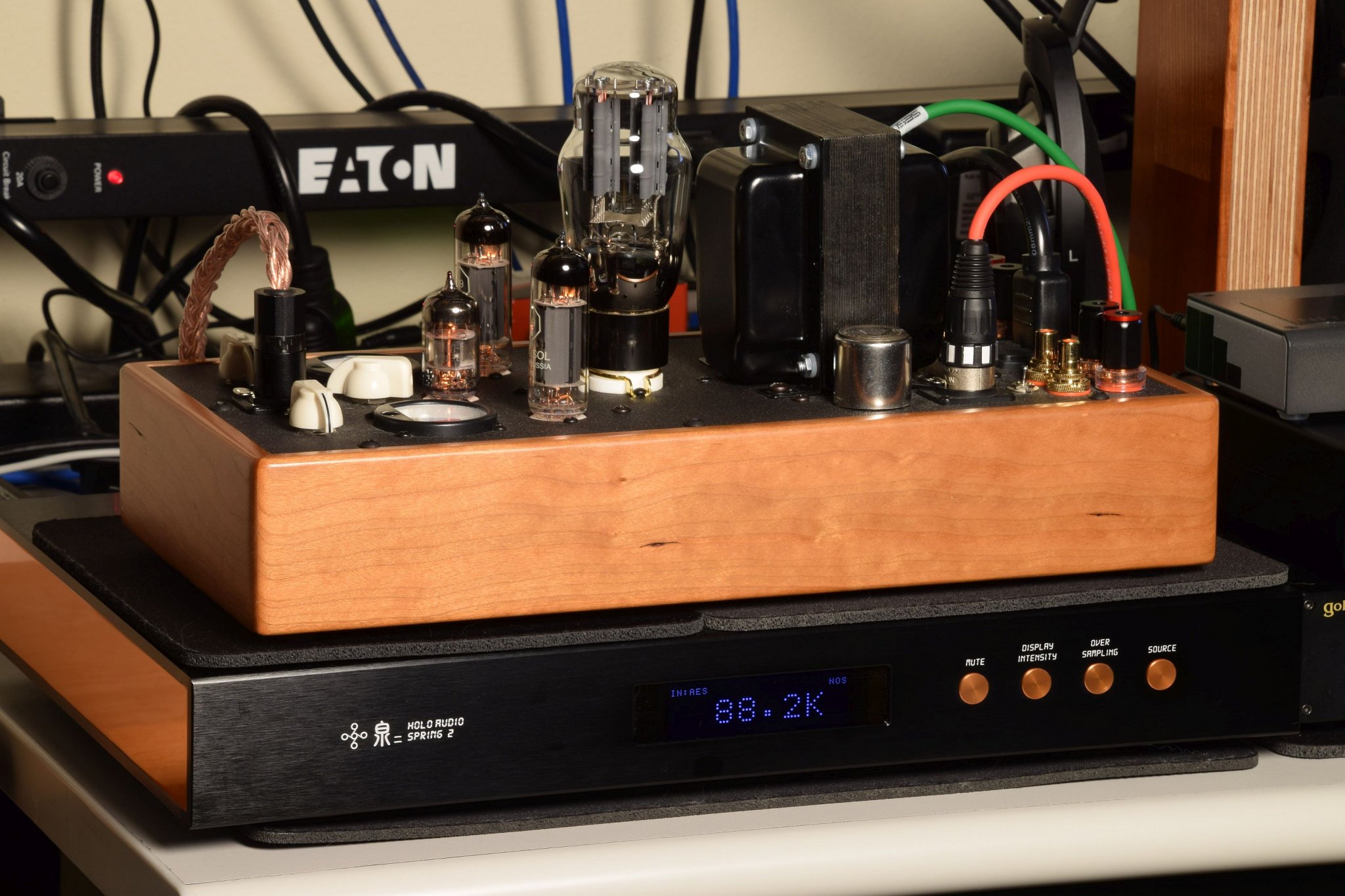 Zen Taboo mk4 inputs switched between Holo Spring 2 KTE Bal & SE outputs. Most listening evaluation with gain set to High, crossfeed bypassed, amp volume set for 0 dB gain with Goldpoint SA2X and SA2 external stepped attenuators employed to set level. There are plenty of impressions threads on the forum where more detailed and nuanced thoughts about the various components are discussed. For my preferences, either I like how a system renders music or I don’t.

Notable highlights:
Due to some interesting attributes of this amp I will provide additional commentary and interpretation from which I would normally refrain.

Decware Zen Taboo tonality has always impressed me during listening sessions at various meets. Typically with HD800 headphones and yggdrasil DAC. Meet conditions are often burdened with higher ambient room noise than my dedicated lab listening environment. With the opportunity to hear this wonderful amp in my own setting, the tonality continued to impress.
Continue...
Campfire Audio Supermoon IEM Review and Measurements
14 2,198 by purr1n : Jan 4, 2023 at 5:24 PM
Let's start with measurements first. BTW, I really love the timbre** of the Supermoon. More later... 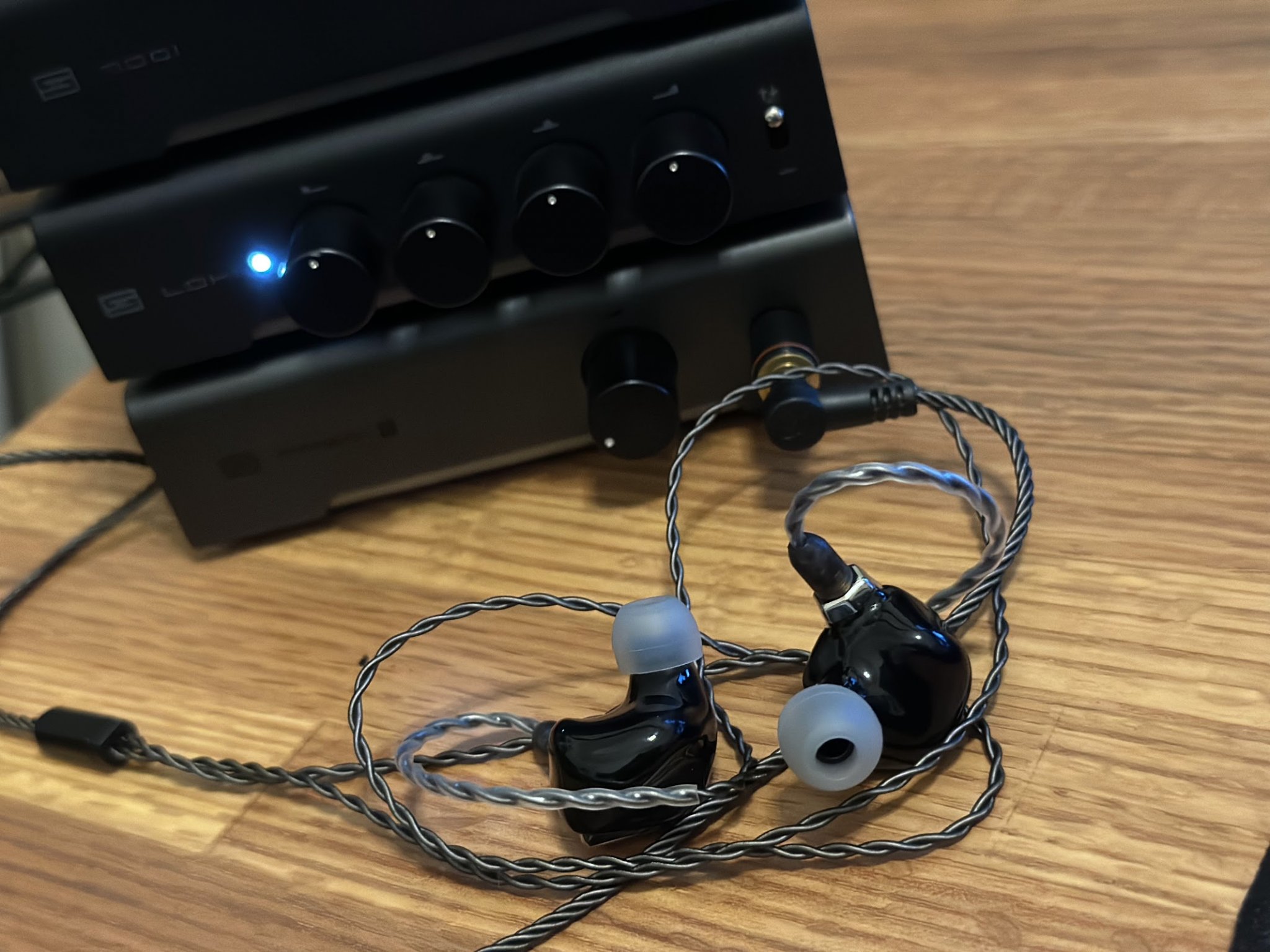 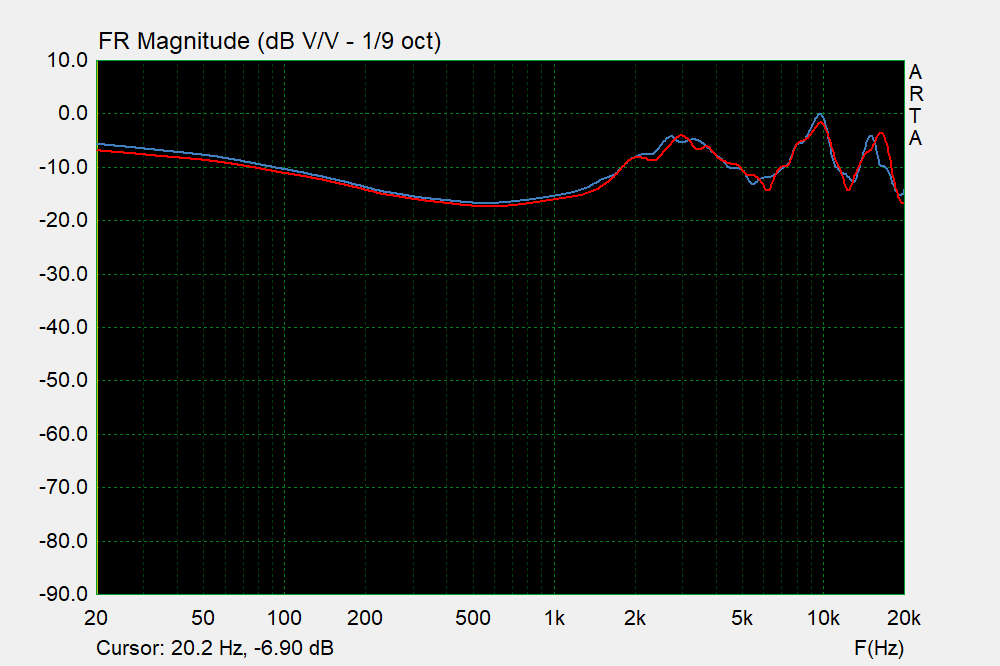 Continue...
Fostex RP KIT50
10 995 by JK47 : Jan 4, 2023 at 2:29 PM
They're basically a kit with MKII headband, MKIII drivers, various dampening materials, two sets of ear pads, and two cables. One of the fellas here posted an ebay link of these open box kits from the UK ,and they accepted my offer of $100 shipped. Everything in the pic below was included, the sticker packs as well, and they appeared to be brand new. The instructions have an English expanation of the various dampeners and mods. Since these are the MKIII drivers with the little window on the back side dampening material, I was surprised to see a tiny piece of foam that can be plugged into that spot that "dampens lower frequency". I haven't tried that option yet though. 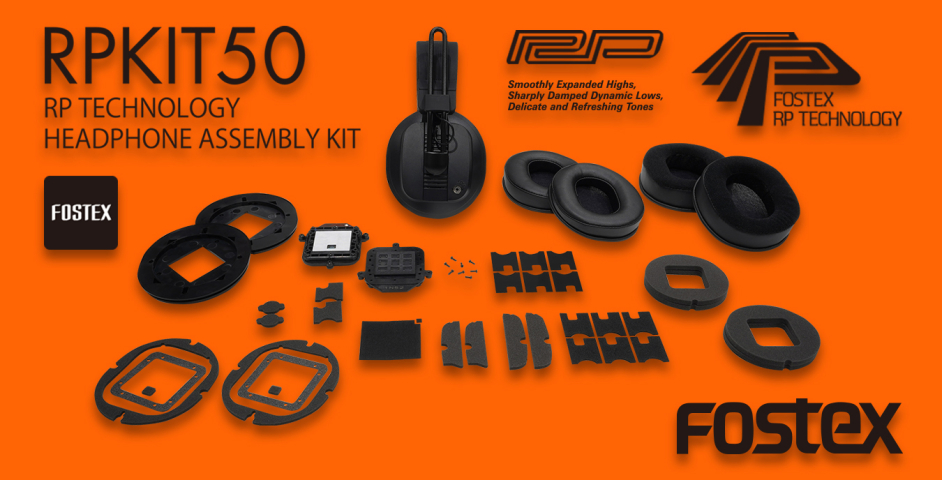 All in all a fun mini project for dirt cheap that took me back to the roots of my addiction to this hobby. Here are a few quick raw measurements I took. The drivers are matched quite well, with a slight leak probably being the culprit of the different low end between channels. Also during a frequency sweep I could hear the Right driver slightly flutter down low and it shows up in the distortion plot as significantly higher down there than the Left.
Continue...
Schiit Modi Multibit 2 Discussion
98 20,689 by purr1n : Dec 30, 2022 at 8:48 AM
Been keeping my thoughts to myself. I've had a few PMs. Let's discuss with those who got them. P.S. Or just ask me questions. (I've already traded notes with other members).
Continue...
Topping D10s Review and Measurements
31 4,159 by purr1n : Dec 25, 2022 at 1:22 PM
I've rarely liked DACs based on ESS chips. The very few exceptions have been DACs from the handful "Sabre-whisperers": LH Labs (ugh), Matrix X-Sabre (OG and Pro), MOTU, and now Schiit. In general, I've found ESS DACs unlistenable in the highs with excess "digititus" (what I would describe as glare, stridency, etch, harshness) and fake macro-detail along with indistinct bass texture and zero depth to instruments in the soundstage (although soundstage placement was often deep). A Sabre based DAC would be warm, lean, neutral, but it was always the horrible highs that annoyed me. Sometimes these headache inducing effects would be immediate, other times, it would take maybe a minute. 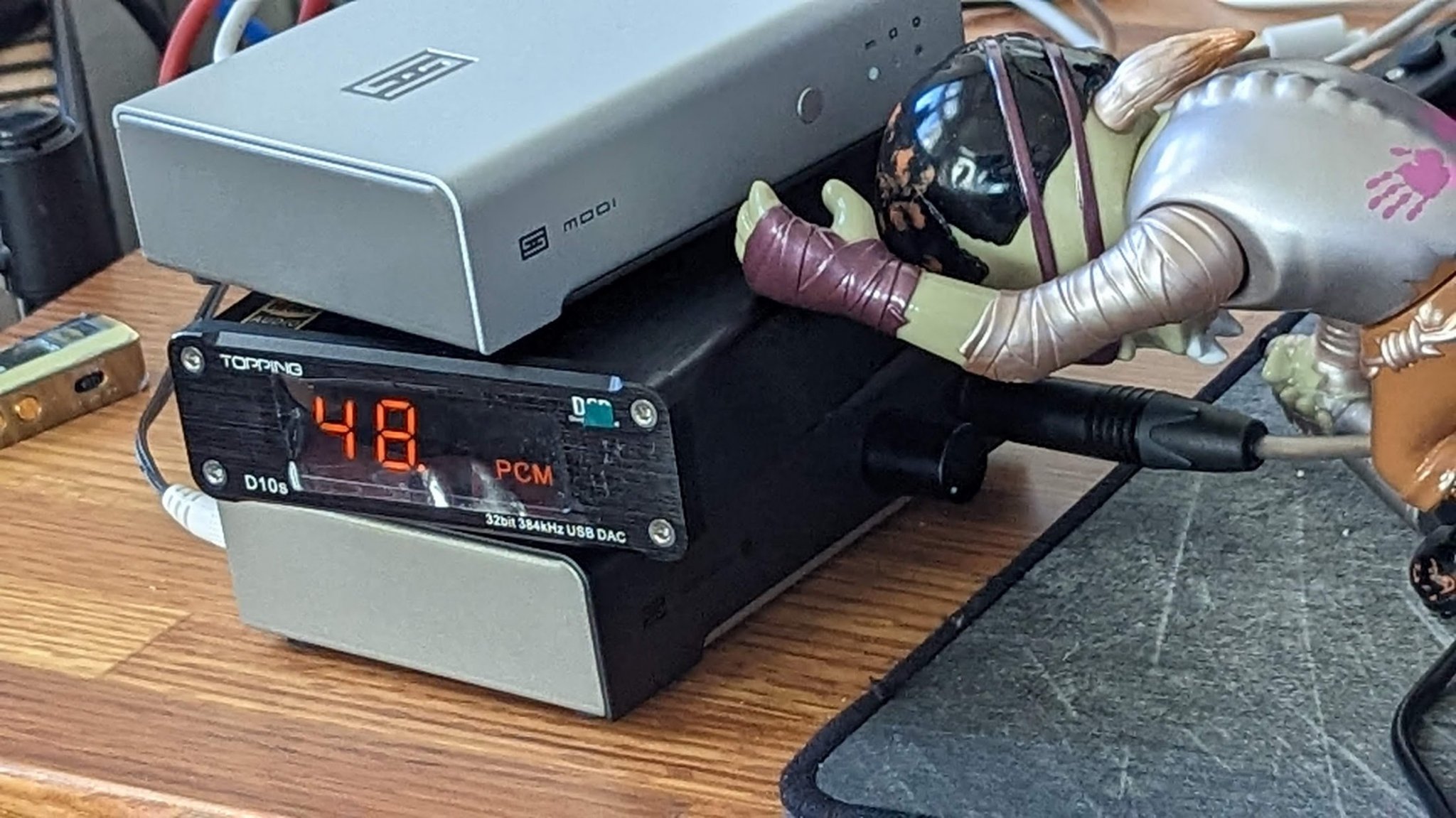 What piqued my interest in the Topping D10s were three things: (1) the TOTL low power ES9038Q2M chip - of which some feel does sound less "Sabrey" than with past chips; (2) the dirt-cheap price - usually entry level Topping has been more expensive that I would have liked considering the China labor, access to chip parts, and crap generic casework, despite the LED panel displays); (3) rollable opamp - here I'm figuring if they are using a lean or bright sounding opamp, I would swap to something less bright.
Continue...
Schiitr-Less Meet - CC Texas - Impressions
60 7,960 by Azimuth : Dec 15, 2022 at 9:31 AM
Meet was hella fun. Got to meet a lot of great folks from Schiit. I’ll do a write-up later when I get home. 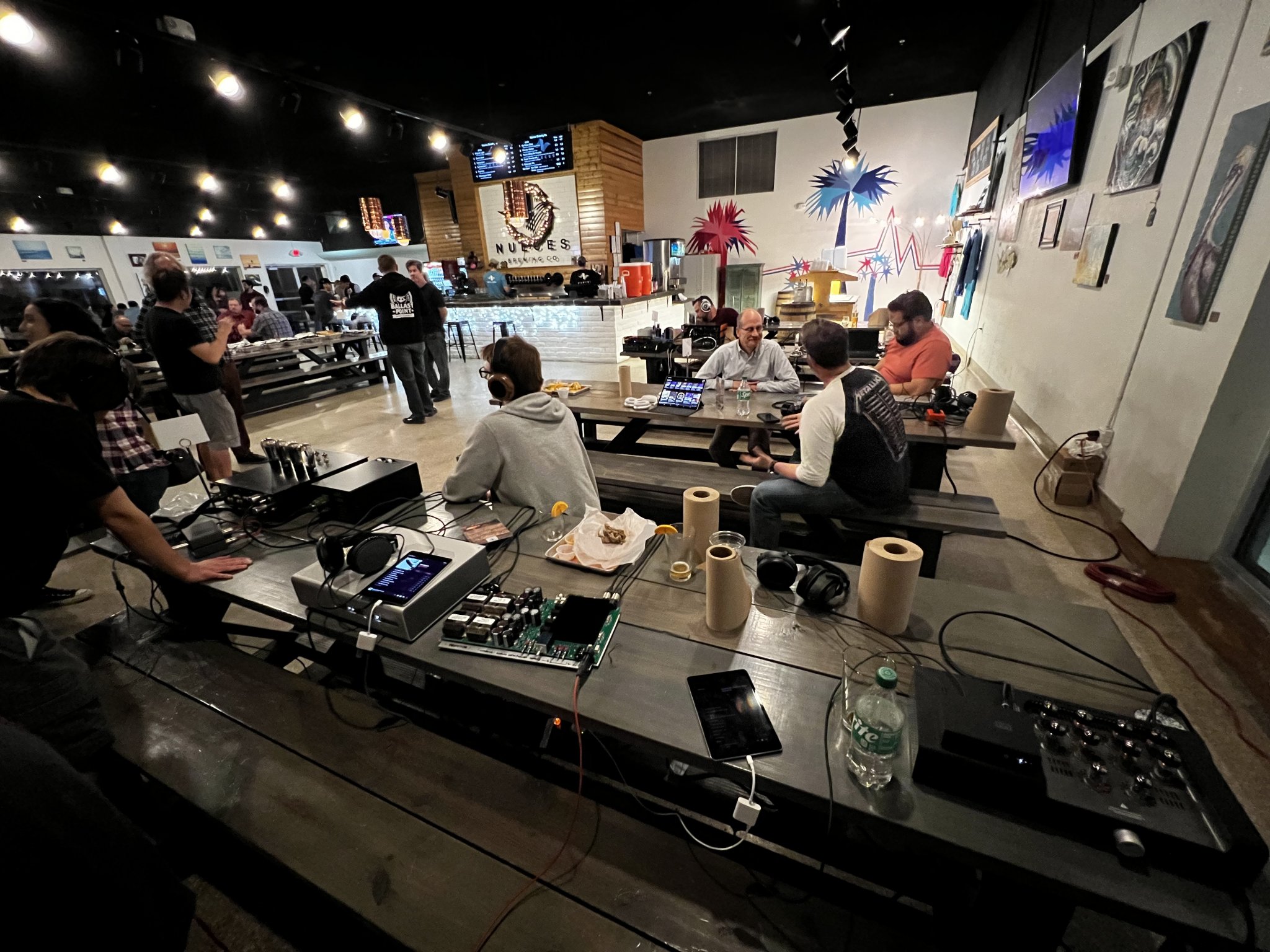 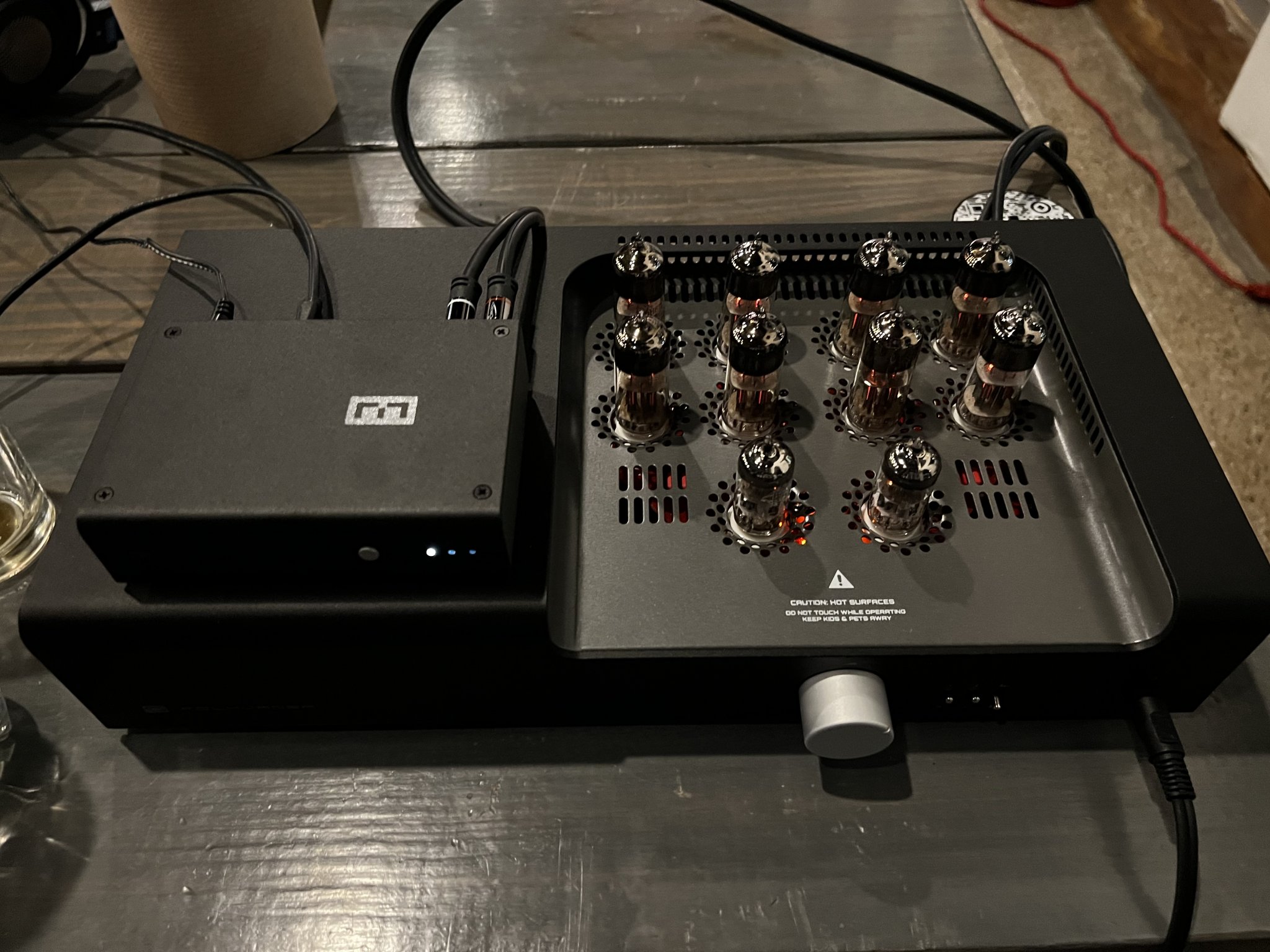 Continue...
Abbas DACs
26 3,913 by Merrick : Dec 11, 2022 at 2:44 PM
There has been talk of Abbas DACs around here for some time, including IIRC a short personal loaner tour, but it's all scattered as isolated posts in other threads. As @Ksorota has one for sale right now, and other units have circulated within our community, I felt it was worth having a place to discuss them. 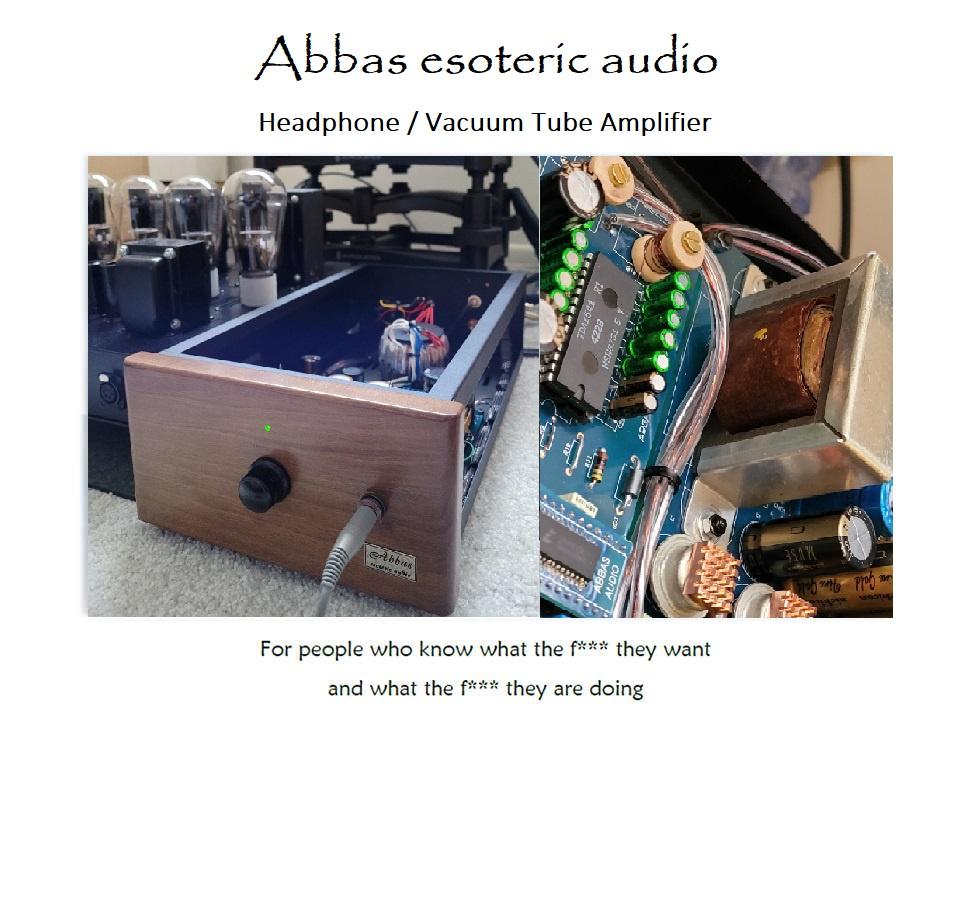 Continue...
Schiit Magni +
8 2,228 by Azimuth : Dec 6, 2022 at 11:51 AM
Magni has been around for 10 years. It has served as an entry point into the headphone hi-fi hobby for quite some time. Although many of us have moved on to other gear and have suggested even other gear, eg. Vali ams (1, 2, 2+, +), Magni still serves as this low cost small form factor solid state amp to use with an external DAC, and really the start of the small Schiit stack with the Modi 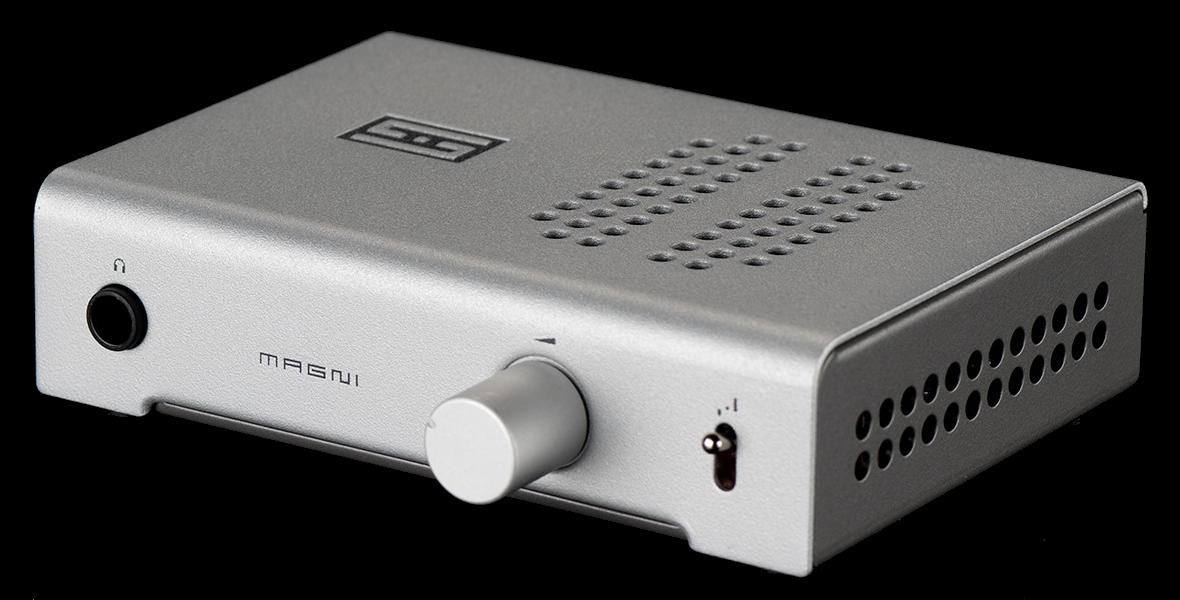 Tldr; and improvement over all the other Magni’s from the past, but not a Piety killer

Now right when the Magni + was released, there was already hype surrounding the Magni Piety through NITSCH’s limited run. And anyone who purchased a Piety can rest assured that the + I do not think is a Piety killer. However, I do think it is an improvement from all the other Magni’s, especially over Magni 2.

​
Continue...
The Ultimate Lurker's Guide to a Winning Budget Setup, SBAF-Style
74 11,868 by caute : Dec 6, 2022 at 8:46 AM
This thread's intention is to gather in one repository, any member who wants to contribute their knowledge, time and experience in creating addictively listenable, superbly ratio'd price : performance setups.

Continue...
Page 1 of 27
XenPorta 2 PRO © Jason Axelrod from 8WAYRUN
SBAF is supported by the following: